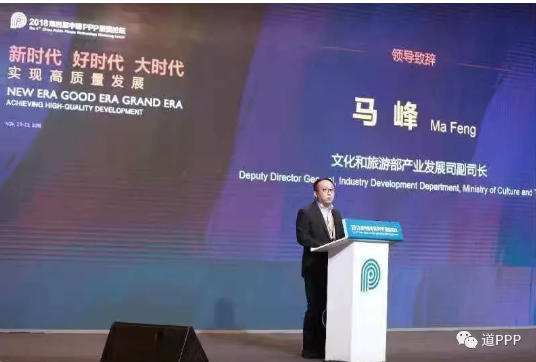 In order to implement the spirit of the “Outline of the Program for Cultural Reform and Development During the 13th Five-Year Period”, deepen the supply-side structural reform in the cultural field, innovate the cultural supply mechanism, and guide social capital to actively participate in PPP projects in the cultural field, the Ministry of Culture and Tourism and the Ministry of Finance held a release event of the “Guidelines on Promoting Public Private Partnership Model in the Cultural Field” (hereinafter referred to as “Guidelines”) at the 4th China PPP Financing Forum on December 23. This event aims to increase the promotion of PPP model in the cultural field, and actively explore new measures and approaches to emancipate and develop cultural productivity, which is conducive to achieving win-win cooperation between the government and social capital.

Ma Feng, deputy director of the Division of Industrial Development of the Ministry of Culture and Tourism, and Jiao Xiaoping, director of China PPP Center of Ministry of Finance, delivered speeches at the meeting. Ma Feng made a detailed interpretation to the participants in terms of the drafting background, main contents and characteristics of the “Guidelines”.

Ma Feng noted that the Division of Industry Development and Division of Public Affairs of the Ministry of Culture and Tourism, along with the Financial Division of the Ministry of Finance and the China PPP Center invited experts, representatives from financial institutions, consulting agencies, investment institutions and other agencies to draft the documents based on research, then through revision and improvement, the ‘Guidelines’ is officially released today. The four major characteristics of the “Guidelines” are as follows: first, it highlights the operation as core of the cultural PPP projects, encouraging the enterprises with experience in operating and managing projects to participate in the long-term operation of cultural PPP projects. Second, give emphasis on optimizing the reward mechanism of cultural PPP projects. Third, make it clear that a cultural PPP fund will be set up. Last but not least, determine the leading fields for promoting the PPP model in the cultural field.

Jiao Xiaoping noted that the “Guidelines” issued by the Ministry of Culture and Tourism is a major measure to implement the relevant arrangements of the Party Central Committee and the State Council. The promotion and application of the PPP model in the cultural field will inevitably bring new energy into cultural development of China, and make greater contribution in promoting the PPP model applied in the cultural field and improving the quality and efficiency of public services.